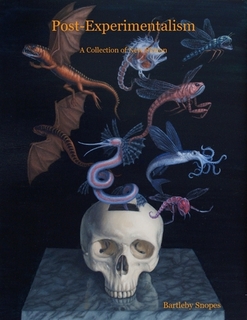 I had approached Bartleby Snopes’s special issue devoted to “post-experimentalism” unfamiliar with the genre. But finishing the 17 thematically-grouped stories that comprise the issue moved me no closer to a reliable definition; in fact, it rendered the genre, makeshift or not, more nebulous.

Primarily problematic is that one doesn’t quite get a good sense of what differentiates these stories from the usual arbitrarily grouped fare we see in most other reputable literary magazines. The lingering question, “What is post-experimentalism?” feels somewhat imposed and is more a distraction than anything. (Though I found intriguing the idiosyncratic definitions supplied by the individual authors and subsequently displayed by their stories).

That’s not to say the issue isn’t enjoyable. Stripped of the extraneous post-experimentalism plastic covering, many of the stories make for quite good reads in and of themselves. They are all concerned with the bizarre, more or less. Some don’t feel quite up to par, like “Good Kill,” which is eerily topical (given the recent Newtown shootings) but may be predictable for some; or Joachim Frank’s “The New Gift,” a light, throwaway story, which feels out of place as the issue’s endpiece. But there are a few that merit recommendation, like Andrew Battershill’s cheeky “Laundry under cover of darkness” (perhaps my favorite of the lot), in which two narrative strands unfold, quite literally, side by side; Jacqueline Doyle’s creative “The Last Metaphor,”  which plays with the figure of speech all while transcending gimmickry; Len Kuntz’s beautiful and unsettling “Milk,” in which the narrator’s lover transforms into milk before his eyes; and Edward Trefts’s “Parable of the Door,” an aleatoric and surreal journey that culminates in two hauntingly good lines.

Rio Liang received his MFA in creative writing from Saint Mary's College of California. He is a frequent contributor of literary, film, music, and video game reviews for the arts and culture blog Ruelle Electrique (https://ruelleelectrique.wordpress.com). He is also a blog contributor for the online literary magazine Carve (http://carvezine.com). You can keep up with his latest antics at http://rioliang.wordpress.com. View all posts by Rio Liang